The ‘Top Chef’ alumnus discusses what makes Hawaii or local cuisine different from Hawaiian food and shares a recipe for Chicken Hekka.

Designed by Grace Han for Thrillist

Hawaiian food and Hawaiian food are not the same thing. Sheldon Simeon, an alumnus of Top chef and the cook and owner of Tin roof in Maui, makes this very clear in his upcoming cookbook, Cook real Hawaii.

“Fortunately, we have an indigenous culture that is amazing. This is Hawaiian food – that’s the Kanaka, ”he explains. Hawaiian food, or what Simeon often calls local food, is different. It is the result of immigration and the merging of cultures that live in harmony on the Hawaiian Islands. It is the influences of Japanese, Chinese, Filipino and other migrants who have settled in paradise. It is a cuisine of adaptation based on ingredients that thrive on the tropical islands.

“When [immigrants] When they traveled to Hawaii they had to bring with them every touch of culture that they had. When they started cooking these recipes from where they came from, they didn’t have a google. They couldn’t call their mother, ”Simeon chuckles. “You just had to work on the basis of memory and use what was available.”

This also applies to Simeon’s own family. As a third generation Filipino American born and raised in Hilo, Hawaii, the darker and salty Filipino soy sauce often had to be swapped for a more readily available and thinner Japanese soy sauce, while apple cider vinegar was used in place of typical recipes for white wine vinegar. “You see this mix of things and it ultimately becomes its own kitchen,” explains Simeon. “That’s our language. We have our own pidgin language in Hawaii and it kind of mixes up and becomes a whole of its own. “ 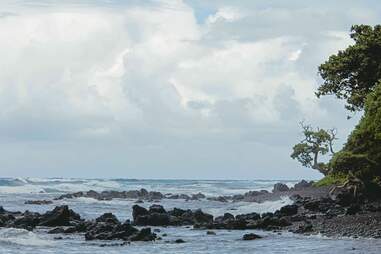 When creating his cookbook, Simeon relied on his community and heritage for recipes. However, the main driving force behind the creation of the cookbook is his wife. “She was my greatest encouragement,” he says. “When I’ve traveled the world in all of these kitchens, the Hawaiian cuisine narrative was not focused. People have their own idea of ​​what Hawaiian cuisine is based on what they’ve seen in the media or through stories or insights. But when you start peeling off the layers and going through the chapters of Hawaiian history there is so much depth. “

Despite the rich history and the amalgamation of different cuisines, Simeon wants his cookbook readers not to be intimidated by Hawaiian food. “I really wanted to make a book that you could cook from,” he explains. “A lot of recipes are about doing something – so a lot of them are really easy.” Instead of complex ingredients and tricky techniques, the recipes in his book focus on eating yourself as quickly as possible and getting the family to the table as quickly as possible.

One such recipe it includes is for Chicken Hekka, a Japanese-influenced dish that Simeon calls the ultimate potluck meal. “It’s a dish I remember well when I went to a party as a kid and was able to put it on the table was an honor.” Although the story of Chicken Hekka cannot be traced back to any specific location, it is believed that Hekka is derived from the ancient Hiroshima word Heka – with a K – which is the word for Sukiyaki. Chicken hekka is slowly cooked with a sweet sauce similar to sukiyaki, which makes a strong theory. “It’s cool – that’s why I wanted to include it in the book. Yes, it’s Japanese, but it’s a dish that you can only find here in Hawaii. “

For Simeon, cooking real Hawaii isn’t about technique or specific ingredients. Instead, it’s a feeling and an instinct. “It’s ohana based and it’s community based,” he says. “Eating is a part of our lives and sharing with our families and meeting our friends – for me that means cooking real Hawaii.”

For people who first pick up Simeon’s cookbook, he hopes the sense of aloha and ohana flows through the pages. “You may never visit Hawaii, but I hope I’ll give you a snapshot of how great Hawaii is. It is a real paradise. “ 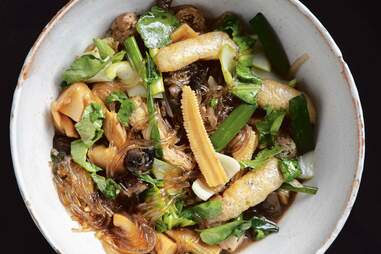 2. In a large wok or Dutch oven, heat the sesame oil over medium to high heat. Add the chicken, raise the heat to high, and sauté for 3 to 4 minutes, until the meat is mostly cooked. Add the ginger and garlic and sauté fragrant. Add the carrots, onions, baby corn, bamboo shoots, shoyu mixture, and chicken broth. Save the soaking liquid, drain the mushrooms, cut and discard all the stems, and slice the caps. Add them and the soaking liquid to the pan. Bring everything to a boil, then reduce the heat and simmer for 10 minutes.

3. Drain the cellophane noodles (they should be softened at this point) and cut them into 3-inch lengths. Add them to the pan along with the watercress, baby bok choy, abura age, and spring onions and simmer until the greens are blanched but firm, 2 to 3 minutes longer. Serve with cooked rice if desired.

US legal professional for Hawaii Kenji Worth resigns