Honey bees are an integral part of Kailin Kim’s five-acre farm on the Big Island. The bees pollinate food for their free-range cattle, increase production in their orange, avocado, longan and lychee orchards, and produce honey and wax, which Kim sells.

“Bees have become a way of connecting with our community and living the lifestyle we want: raising our children with us on the farm and really doing something that is fulfilling work,” she said.

Kim is rescuing wild swarms and managing about 60 hives across Kohala, and while she is grateful for the many benefits honeybees have and is committed to protecting their populations, she is well aware that it is technically an invasive species.

There is some evidence that honeybees can negatively impact an endangered native bee, and some say native pollinators should take precedence over honeybees. But others argue that Hawaii should include non-native species in order to reduce the state’s reliance on imported food. 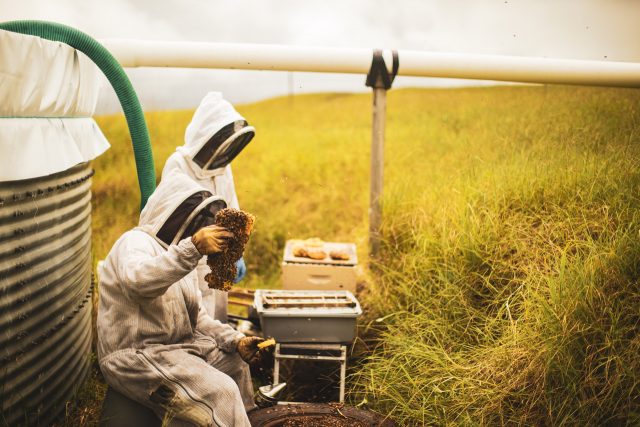 Kailin Kim and her husband bring a swarm of wild bees to a beehive. Courtesy: Perrin James / Hoʻola Honey

Honey bees, native to Europe, were purposely spread around the world because they are the most efficient pollinators in the world. According to a 2007 estimate by the Hawaii Department of Agriculture, approximately 70% of Hawaii’s food harvest depends on honeybees.

“They’re the most important aspect of farming and growing your own food,” said Kim. “They are the only thing you can’t farm without.”

Pests are the number one threat to honeybees in Hawaii. The Varroa mite was accidentally introduced to Hawaii in 2007, followed by the tiny beetle beetle in 2010. Both pests have killed countless honeybees in the state.

There is also foulbrood, a bacterial infection that kills entire beehives and decimated the state’s thriving honey industry in the 1930s. Significant resources are being put into stopping the spread of foulbrood, varroa mites, and other pests, including a ban on the importation of bees and laws restricting the movement of bees and beekeeping equipment between islands.

Pesticides are also a topic of discussion. In 2014, Hawaii banned the use of a certain insecticide, mainly due to concerns about bee deaths. Environmentalists warn that honey bees can be poisoned if homeowners or farmers don’t carefully follow the directions on the back of insecticide bottles, and some beekeepers advocate banning certain chemicals altogether.

But Darcy Oishi, director of biological control at the Hawaii Department of Agriculture, said the threat to honeybees was overstated.

“In most cases the discussion about the threat to bees is not about European honey bees,” he said. “They are important from an agricultural point of view, but they are not at home here.”

Oishi is much more concerned about the health of native pollinators. 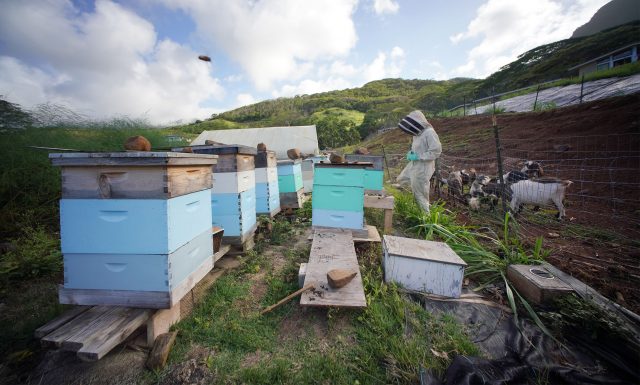 A group of beehives on Oahu, near Olomana. In contrast to honey bees, native bees are loners and prefer to nest in small holes or tunnels in the wood. Cory Lum / Civil Beat / 2021

“For better or worse, you won’t encounter native Hawaiian bees in a home garden or in any actual agricultural area,” said Chrissy Mogren, a pollination expert at the University of Hawaii. “They have very close plant associations with native plants, so you are more likely to see them in what are really surviving native vegetation habitats.”

Mogren co-wrote an article on the interaction of honey bees with a species of Hawaii’s endangered yellow-faced bee. The study found that native bees spend much less time on a flower that has recently been visited by a honey bee, which is not the case when a flower has been visited by a bee of the same species.

“It’s an indication of resource competition and competitive exclusion,” she said.

Mogren recommends beekeepers remove hives from areas with native bee populations, but honey bees swarm when they outgrow their homes. While responsible beekeepers have additional hives nearby to attract swarms, the increase in honey bee population in Hawaii increases the risk of swarms settling in areas populated by native bees.

This could not only affect native bees, said Oishi, but also native plants.

“Native pollinators, for the most part, are better adapted to pollinating the plants they evolved with,” Oishi said. “With the loss of these native bees, we can lose entire habitats that rely on the pollen they provide.”

And Hawaii’s native pollinators are struggling. 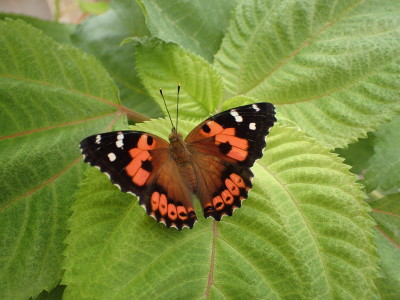 Kamehameha butterflies rely on koa trees, which are no longer abundant on the islands. W. Haines

Seven species of yellow-faced bee are on the list of endangered species. It is also rare now to see the Kamehameha butterfly pollinating a flower, despite being named the state’s official insect in 2009. The sphinx moth was once a busy pollinator on the islands, relying on Aiea trees as hosts. But now both the moth and its host tree are threatened with extinction.

“Hawaii is a place where we know many pollinators are in deep, deep trouble,” said Scott Hoffman Black, executive director of the Xerces Society for Invertebrate Conservation.

The Xerces Society is an active advocate for native Hawaiian pollinators, but also educates people on how to help Hawaii’s honeybee populations.

Certain pests kill honey bees as well as native bees. Improper or excessive use of pesticides in residential and agricultural areas can poison any species of bees, and both honey bees and native pollinators will starve to death without adequate access to flowering plants.

Black and Mogren are both focused on interventions that could help native pollinators and honeybees as it may be too late to rely solely on native species to pollinate native plants.

“As much as we want these native pollinators to stay around forever, if for some reason they go extinct, honeybees could potentially take over,” Mogren said. “At least we wouldn’t lose these native plants too.”

“When we think of planting native plants, it’s not just about providing a habitat for an introduced species, it’s also about preserving the culture,” she said, highlighting plants that are used to make leis or in of traditional Hawaiian medicine and recipes. 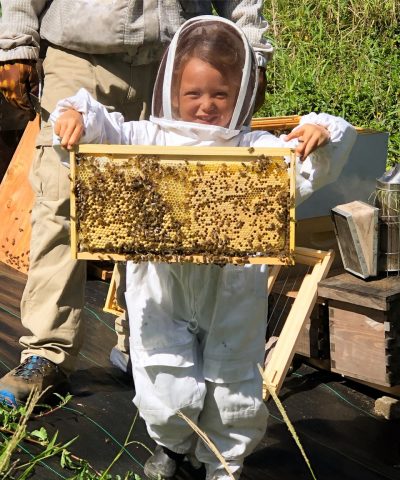 But only a small fraction of Hawaii’s edible native plants needs to be pollinated and staples like taro and breadfruit do not need to be pollinated. For centuries, native pollinators have been able to focus on inedible flowers without compromising food supplies.

“The Hawaiian landscape has changed dramatically since the Europeans first emerged and honeybees are now an integral part of that changed landscape,” Mogren said.

Hawaii already imports an estimated 85% of its food, and there are nowhere near enough farmers growing native crops to feed the population. So if Hawaiian residents want melons, watermelons, cucumbers, pumpkin, lychee, mango, eggplant, avocado, and guava at farmers’ markets, the state must protect its honey bee population.

“The Save the Bees movement is not just about bees,” she said. “When we have a healthy environment for bees to thrive, it means we are connected to our food, our gardens, and each other. Bees are part of all of this. “

How this group hopes to remodel Hawaii’s agricultural panorama

Why are extra individuals getting meals stamps in Hawaii than ever?

Hawaii Meals Financial institution serves 80,000 individuals a month throughout the…

How this group hopes to remodel Hawaii’s agricultural…